The Big Five!  The dream of all safari travelers is to see the Big Five: lions, leopards, rhinos, elephants, and buffaloes. New Adventures offers the classic Kenya Safari experience visiting the Masai Mara National Reserve, one of the most notable and world famous game viewing parks.

A safari in Kenya offers spectacular natural beauty and once in a lifetime game viewing.  See millions of wildebeests and zebras that migrate from the Serengeti plains of neighboring Tanzania in search of water, otherwise known as The Great MIgration.  Kenya also offers bird-watchers the unmatched opportunity to see over 1,000 species and giraffe lovers can feed these elegant, long-necked animals at the Nairobi Giraffe Centre.  Here are some highlights of a Kenya Safari:

No matter which Kenya safari you choose with New Adventures, you will experience once-in-a-lifetime game viewing.  Masai Mara and Samburu are two of Kenya's most magnificent National Reserves where you can see the Big Five and experience The Great Migration. Stay in unique lodges for a romantic safari or select accommodations designed for families. Wake up to breathtaking views of Mount Kilimanjaro. Tour the Serengeti, Lake Manyara, Nakuru or Amboseli. 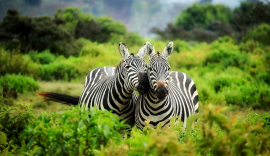 If you're interested in wildlife photography, then this is the ideal trip for you!  Stays in several Kenya parks guarantee plenty of opportunities to photograph wildlife in their natural habitats. 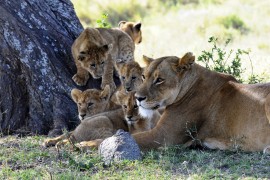 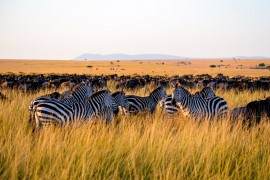 Take a flight to the Masai Mara and discover the wildlife in Kenya's top game reserve.

Kenya is the home of the safari.

The boundless wilderness and big game of this region has long attracted adventure seekers from all over the globe. No other African country can boast such an incredible range of landscapes, unique geographical features and species.

Kenya offers the visitor a chance to experience a natural world unchanged by the passage of time. The Kenyan wilderness is home to an endless array of ecosystems, the staging ground for natural cycles of life, death and regeneration as old as the planet itself.
This great range of natural habitats means that there is plenty to explore, and plenty of species to encounter.

This is a land of endless potential for the wildlife enthusiast. From great migratory herds of the open savannah to an incredible abundance of birdlife, from the depths of a tropical rainforest to the depths of the Indian Ocean teeming with fish, this a world of natural wonders.

A safari into the wilds of Kenya is a journey into nature at its purest. Everywhere you look there is a profusion of life…

Vast, rolling plains, seemingly miles of visibility, disclosing dark moving shapes which are, in fact, distant elephants, and tall skinny shapes which, on closer inspection, reveal giraffe necks as they scour tree branches. Kenya is where “safari” was born and the Masai Mara is, far and away, Kenya’s best. The Mara is huge and alive with animals, birds and the tenacious savannah vegetation. Crosshatched with safari dirt tracks whose route map is known only to the expert driver guides, the Masai Mara is a visual challenge: anywhere you look will present a fascinating wildlife drama. “Safari” is Swahili for “travel” and as you safari through the 600 square miles of this protected reserve, your travel takes you through an ancient, elemental world. Prey and predator. Life and death. Nature’s balancing acts play out daily in the savannah, acacia woodlands and forested riverbanks.

You’ll hear the phrase “Big 5” bandied about and, of course, they’ll top your own game viewing list as well: lion, leopard, elephant, rhino and buffalo. Chances are good you’ll see them all here. And more, much, much more. Wildebeest and zebra in migratory motion, Thomson’s gazelle and eland, hartebeest, topi, ostrich, cheetah, jackal and hyena – and that’s only a scattering of the ground level denizens. Eagles soar, vulture circle, secretary birds strut and posture, blue necked guinea fowl root, hippos and crocs share an easy riverbed truce – one in noisy, splashing groups, the other as silent statues surviving from times prehistoric.

Nomadic Masai tribesmen, grazing their cattle and goats outside the park, present slender scarlet silhouettes. Red, they believe, is a color feared by predators, and their own bravery protecting their herds is legendary.

In mid-July to mid-September two million zebra and wildebeest forage north from Tanzania’s Serengeti into Kenya’s Masai Mara.  This is one of the world’s greatest wildlife viewing experiences, one the safari-goer shares with prides of lions as the passing menu potential is sized up by hunting lionesses. Every day in the Mara is unique, unfolding natural wonders, casting its spell. It was on our first full day in the Mara that we witnessed the birth of a giraffe – a sight seldom seen and a rare privilege we were granted.
Go slowly here, eyes scanning, cameras and binoculars ready, speak in whispers and you’ll pass without disturbing…and the Mara will reveal its secrets.

Samburu National Park is a journey of about 220 miles north of Nairobi in Kenya’s arid, northern scrub lands. This tiny park is only 64 square miles but in its boundaries is the best game viewing the north country has to offer.

A Samburu native, a good friend of ours, is fond of saying “the animals in the north are more beautiful” – and while there’s certainly some regional pride in this statement, there’s also quite a lot of truth. You will see species here you won’t see anywhere else and yes, they are uniformly beautiful. Reticulated giraffe, boldly marked blocks separated by the finest of lines, delicately browse through acacia branches. Grevy’s zebra, fine lined patterns that seem to merge to gray from a distance, is easily distinguished from its Burchell (common) zebra cousin. Besides the finer patterning, the Grevy is larger with more of a domesticated horse conformation; front and back ends seem more in balance. Grevys also seem to have a bit more self possession, less of the Burchell’s spookiness, and maybe that comes from the higher self esteem good looks bring about? One of our favorites is the gerenuk, the gracefully long-necked “giraffe” antelope, who’s perfectly capable of stretching full height on his hind legs to snatch an acacia morsel. That strikingly marked huge antelope, Beisa oryx, lives here as well, as do elephant, lion and the occasional leopard.

Our tours that include Samburu, schedule 2 nights here. And it’s just barely enough. Samburu is a place, like the deserts of the American Southwest, that inspires strong emotion, fierce feelings of connectivity with the land and its wildlife. Samburu conjures a sense of place…a feeling that every scrubby acacia, every thorn bush, every tuft of desert grass or riverbank green has a secret story. And if you’re lucky, you’ll be a part of some of them.

Traveling up, high in the mountains, on a clear day in Aberdare National Park you may have an excellent view of Kenya’s geological extremes: the summit of Mt. Kenya and the Great Rift Valley. Poised between the two are the richly forested slopes of the Aberdare Mountains.
The forest habitat, most of which lies above 9,800 feet in elevation, can be brisk during the day and downright cold at night…a jacket or warm sweater is essential. The native animals seem to be bundled up as well, protected by thick skins or furry coats. Black rhino, forest elephant, buffalo, waterbuck, bushbuck, giant forest hog and the stealthy leopard may all pay a visit to the water hole at your hotel…sometimes in great numbers.

During our stay at The Ark we were visited by more than 30 elephants, members of two related families, who’d come to drink and scoop the salt rich soil. This was a fascinating glimpse of organized elephant society: huge matriarchs leading the way, younger bulls attentively standing guard, tiny babies huddling close to Mama’s legs, trying to imitate her digging and scooping but, lacking tusks (these start to come in at around age 3) not accomplishing much. Full grown elephants have no natural enemies but are fiercely protective both of their young and of their exclusive rights to the saltlick whenever they choose to indulge.
Both The Ark and Mountain Lodge have waterholes that are floodlit; guests can opt to view the panorama all night long or wait for the room buzzer to awaken them if there’s something really special that’s come to partake. Either way, it’s definitely a night…an experience…you’ll never forget.

Black rhino, white rhino and pink flamingos – this has to be one of Nature’s oddest combination of attractions, but that’s exactly what this park has to offer. And what a spectacle this can be.

Lake Nakuru National Park is slightly larger than Lake Nakuru itself, covering about 73 square miles. Which raises the question: just how many flamingos can comfortably squeeze into the shallow, wading lake’s edge waters? The answer can be, amazingly enough, sometimes more than one million. From a distance, it looks like a pink ribbon encircling the lake, a bobbing, preening, scratching, stilt-legged pink ribbon of greater and less flamingos. With white rhinos grazing on the shoreline, determinedly herding their babies, smaller size version of the adult edition, in front of them. And elusive, determinedly non-social black rhinos taking cover in the woods surrounding the lake. The endangered black rhino has a sanctuary here at Lake Nakuru National Park and their presence is scrupulously guarded – Asian traditional medicines have demanded rhino horn as a key ingredient for centuries, although NOT, as many think, for purported aphrodisiac qualities. The horn is, of course, not really horn, but a thick matting of hair-like fiber.

Besides these, there are 400 other species of birds visiting the alkaline lake, plus introduced Rothschild’s giraffe, buffalo, leopard, hippo and baboon. Games drives will take your right down to the lake edge and it’s possible to make the full circuit of its circumference. It’s a fascinating trip: tall trees possibly hiding leopard on one side and the pink rimmed lake on the other. Nakuru is a study in contrast.

We're working on adding photos for Kenya. Check back soon!